Kazu has a repertoire of Japanese folk tales, fables and poems as well as stories from around the world. 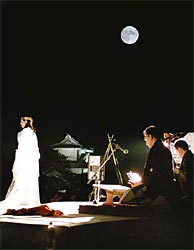 Kazu has been invited to Singapore and the U.S. as well to tell her powerful tales.

In May 2004 She was invited to participate in The Seattle International Children’s Festival.

Kazu’s stories are told in galleries, concert halls, castle, libraries, conferences, and on outdoor stages, too.

Most of her storytelling is done solo, but recently she has performed in varied collaborations with musicians who play shakuhachi, shino-bue, cello, piano, classical guitar or percussion.

Kazu creates harmony between the stories and music in her own mystic and uncommon way.